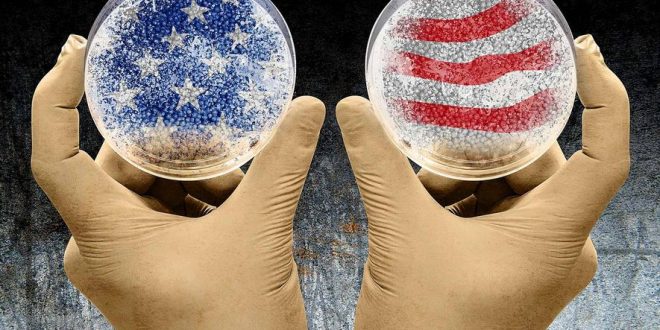 THE ETERNAL MEANING OF INDEPENDENCE DAY

POSTED ON JULY 4, 2018 BY SCOTT JOHNSON ON POWERLINEBLOG.COM

On July 9, 1858, Illinois Senator Stephen Douglas gave a campaign speech to a raucous throng from the balcony of the Tremont Hotel in Chicago. Abraham Lincoln was in the audience as Douglas prepared to speak. Douglas graciously invited Lincoln to join him on the balcony to listen to the speech.

In his speech Douglas sounded the themes of the momentous campaign that Lincoln and Douglas waged that summer and fall for Douglas’s Senate seat. Douglas paid tribute to Lincoln as a “kind, amiable, and intelligent gentleman, a good citizen and an honorable opponent,” but took issue with Lincoln’s June 16 speech to the Illinois Republican convention that had named him its candidate for Douglas’s seat. In that speech Lincoln had famously asserted that the nation could not exist “half slave and half free.” According to Douglas, Lincoln’s assertion belied the “diversity” in domestic institutions that was “the great safeguard of our liberties.” Then as now, “diversity” was a shibboleth hiding an evil institution that could not be defended on its own terms.

Douglas responded to Lincoln’s condemnation of the Supreme Court’s Dred Scott decision — a condemnation that was the centerpiece of Lincoln’s convention speech. “I am free to say to you,” Douglas said, “that in my opinion this government of ours is founded on the white basis. It was made by the white man, for the benefit of the white man, to be administered by white men, in such manner as they should determine.”

Lincoln invited Douglas’s audience to return the next evening for his reply to Douglas’s speech. Lincoln’s speech of July 10, 1858, is one of his many great speeches, but in one respect it is uniquely great. It concludes with an explanation of the meaning of this day to Americans with incomparable eloquence and insight in words that remain as relevant now as then (I have added some paragraphing in the interest of readability):

Now, it happens that we meet together once every year, sometime about the 4th of July, for some reason or other. These 4th of July gatherings I suppose have their uses. If you will indulge me, I will state what I suppose to be some of them.

We are now a mighty nation, we are thirty—or about thirty millions of people, and we own and inhabit about one-fifteenth part of the dry land of the whole earth. We run our memory back over the pages of history for about eighty-two years and we discover that we were then a very small people in point of numbers, vastly inferior to what we are now, with a vastly less extent of country,—with vastly less of everything we deem desirable among men,—we look upon the change as exceedingly advantageous to us and to our posterity, and we fix upon something that happened away back, as in some way or other being connected with this rise of prosperity. We find a race of men living in that day whom we claim as our fathers and grandfathers; they were iron men, they fought for the principle that they were contending for; and we understood that by what they then did it has followed that the degree of prosperity that we now enjoy has come to us.

We hold this annual celebration to remind ourselves of all the good done in this process of time of how it was done and who did it, and how we are historically connected with it; and we go from these meetings in better humor with ourselves—we feel more attached the one to the other, and more firmly bound to the country we inhabit. In every way we are better men in the age, and race, and country in which we live for these celebrations.

But after we have done all this we have not yet reached the whole. There is something else connected with it. We have besides these men—descended by blood from our ancestors—among us perhaps half our people who are not descendants at all of these men, they are men who have come from Europe—German, Irish, French and Scandinavian—men that have come from Europe themselves, or whose ancestors have come hither and settled here, finding themselves our equals in all things. If they look back through this history to trace their connection with those days by blood, they find they have none, they cannot carry themselves back into that glorious epoch and make themselves feel that they are part of us, but when they look through that old Declaration of Independence they find that those old men say that “We hold these truths to be self-evident, that all men are created equal,” and then they feel that that moral sentiment taught in that day evidences their relation to those men, that it is the father of all moral principle in them, and that they have a right to claim it as though they were blood of the blood, and flesh of the flesh of the men who wrote that Declaration [loud and long continued applause], and so they are. That is the electric cord in that Declaration that links the hearts of patriotic and liberty-loving men together, that will link those patriotic hearts as long as the love of freedom exists in the minds of men throughout the world. [Applause.]

Now, sirs, for the purpose of squaring things with this idea of “don’t care if slavery is voted up or voted down” [Douglas’s “popular sovereignty” position on the extension of slavery to the territories], for sustaining the Dred Scott decision [A voice—“Hit him again”], for holding that the Declaration of Independence did not mean anything at all, we have Judge Douglas giving his exposition of what the Declaration of Independence means, and we have him saying that the people of America are equal to the people of England. According to his construction, you Germans are not connected with it. Now I ask you in all soberness, if all these things, if indulged in, if ratified, if confirmed and endorsed, if taught to our children, and repeated to them, do not tend to rub out the sentiment of liberty in the country, and to transform this Government into a government of some other form.

Those arguments that are made, that the inferior race are to be treated with as much allowance as they are capable of enjoying; that as much is to be done for them as their condition will allow. What are these arguments? They are the arguments that kings have made for enslaving the people in all ages of the world. You will find that all the arguments in favor of king-craft were of this class; they always bestrode the necks of the people, not that they wanted to do it, but because the people were better off for being ridden.

That is their argument, and this argument of the Judge is the same old serpent that says you work and I eat, you toil and I will enjoy the fruits of it. Turn in whatever way you will—whether it come from the mouth of a King, an excuse for enslaving the people of his country, or from the mouth of men of one race as a reason for enslaving the men of another race, it is all the same old serpent, and I hold if that course of argumentation that is made for the purpose of convincing the public mind that we should not care about this, should be granted, it does not stop with the negro. I should like to know if taking this old Declaration of Independence, which declares that all men are equal upon principle and making exceptions to it where will it stop. If one man says it does not mean a negro, why not another say it does not mean some other man? If that declaration is not the truth, let us get the Statute book, in which we find it and tear it out! Who is so bold as to do it! [Voices—“me” “no one,” &c.] If it is not true let us tear it out! [cries of “no, no,”] let us stick to it then [cheers], let us stand firmly by it then. [Applause.]

Thank you, Mr. Lincoln. Let us stick to it then. Let us stand firmly by it then.