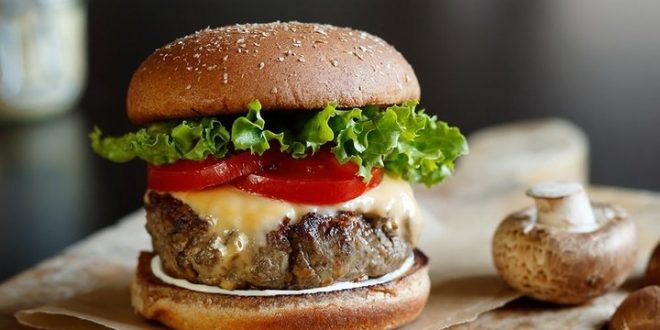 Adding one unfussy ingredient to your burgers can help your health and the planet.

Nothing says summer like a burger fresh off the grill, char marks and all. But eating too much beef can have some pretty rough consequences on your health and the environment.

Turns out there is, and it’s called The Blend. Here’s what you need to know about making the switch.

Red Meat And Your Health

Red meat ― an umbrella term for any meat that looks red when raw (yes, that means bacon and lamb, too) ― gets its color from its high concentration of a protein called myoglobin.

It has plenty of nutrients, but it’s also high in calories and fat, which the American Heart Association says puts you at higher risk for heart disease. Frequent consumption has also been linked to cancer, obesity and an increased risk of premature death.

Eating more plants is the ultimate way to help prevent these diet-related illnesses, said Sydney Greene, a registered dietitian at Middleberg Nutrition in New York City. She recommends sticking to a palm-sized portion of red meat every other week and choosing grass-fed to ensure optimal levels of essential nutrients like iron and omega-3 fatty acids.

Red Meat And The Earth’s Health

Americans eat a lot of red meat: Consumption in the U.S. averaged 216.9 pounds per capita in 2017, according to data from the Department of Agriculture. The agency expects 2018 consumption to reach 222.2 pounds per capita, breaking a record set in 2004.

Producing all that meat is taking a toll on our planet.

Beyond fossil fuel-guzzling farms and factories, the U.S. meat industry only thrives with massive amounts of pesticides, fertilizer, feed and water. In turn, it spits out greenhouse gases, manure and toxic waste.

Greenhouse gas emissions for red meat are 10 to 40 times more than those of grains and vegetables, according to a lifecycle analysis from the Environmental Working Group that looked at the production and distribution of 20 common agricultural products.

Sustainable ranching methods mean red meat production has eco-friendly potential, and organizations like the Global Roundtable for Sustainable Beef are working toward an environmentally sound industry. Still, reducing your consumption of manufactured red meat is a very green lifestyle change.

Going vegetarian isn’t the only option. An innovative cooking technique lets omnivores have their cake and eat it, too.

And by cake, we mean red meat.

The Blend is essentially a beef-mushroom hybrid. It was created as an educational initiative of culinary leaders called The Healthy Menus R&D Collaborative, the result of a partnership between the Culinary Institute of America and the Mushroom Council.

A number of chefs have hopped on board with The Blend’s unique flavor, and Menus of Change, an initiative focused on public health, has voiced its support of the technique. Fast food chain Sonic even added a blended burger to its menu, calling it a healthy option that tastes “like you’re getting away with something.”

How Does It Taste?

Mushrooms are naturally lower in sodium, fat and calories than red meat, but that doesn’t mean they don’t pack in flavor.

James Beard Award winner and Iron Chef Stephanie Izard is partnering with the James Beard Foundation to lead the 2018 Blended Burger Project, a competition challenging chefs to use The Blend to create sustainable, healthy burgers that taste good.

Izard’s burger blends ground beef with shiitake mushrooms and comes topped with asparagus tapenade and rhubarb mostarda. It’s not hard to believe her when she says she likes it better than a regular burger.

“The shiitake mushrooms add another layer of earthiness, richness and just really bring your burger to a whole other level,” she told the James Beard Foundation.

Make The Blend Yourself

If you’re cooking a dish with loose ground meat, toss a handful of mushrooms into your grocery cart. While you prep dinner, mince and add them to your skillet of browning meat. (Sautéeing the mushrooms on high heat with olive oil and spices for five minutes beforehand will add even more flavor.) Chopping will go faster if you have a food processor, but it isn’t required.

Each mushroom variety adds a unique flavor, so experiment to find your favorite. Button, shiitake and crimini are great starts.

To cook a blended burger, combine cooked or raw chopped mushrooms with ground meat and form them into patties before adding them to a grill or skillet. Izard’s recipe uses a 3:2 ratio of beef to mushrooms.  Then cook your burgers like usual. Mushrooms are packed with moisture, making for a juicier, tastier burger.

Once you try it, become a “blenditarian” by pledging your devotion to the technique. So far, more than 2,400 individuals, restaurants, schools and retailers have committed. Still unsure? Find the nearest blenditarian eatery with this interactive map.